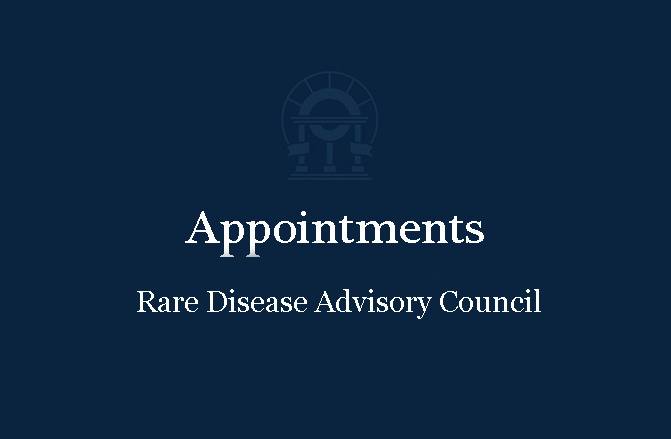 Governor Brian B. Kemp on Friday appointed him to the advisory board for rare diseases in Georgia, set up by House Bell 918. The Board is made up of 16 qualified professionals, people with rare diseases, caregivers appointed by the Governor, the Deputy Governor, and the Speaker of the House of Representatives. He will advise the General Assembly and other government agencies and departments on the needs of individuals with rare diseases living in Georgia.

There are more than 7,000 known rare diseases that affect approximately 25-30 million Americans, more than half of whom are children. People with rare diseases face many challenges, including delays in obtaining an accurate diagnosis, finding a healthcare provider with expertise in their unique condition, and lack of access to the treatments and medications used to treat such diseases.

Nguyen’s house (President) He is the founder of Rare STRIDES® and the Global Task Force for Syringomyelia and Chiari, and a volunteer ambassador for the Georgia National Organization for Rare Disorders. Nguyen is a registered nurse with a diverse background in critical care, transplants, and emergency room experience. She is most passionate about raising rare diseases in healthcare and volunteers her time advocating for children and adults with these conditions. For three consecutive years, Nguyen has been nominated for the Atlanta AJC Nurse of the Year Award for Excellence in Bedside Care. She developed the first multidisciplinary rare disease care model and is the author of numerous published articles and books. Nguyen co-led the effort to create the first Code Rare® medical education program for first responders and medical teams and started the first Rare Wish® program for children and adults affected by rare diseases. As a rare disease patient and medical professional, Nguyen has used her firsthand experience to help drive progress in all areas of care coordination and direct medical care in the field of rare diseases. It is dedicated to empowering medical teams and patients through innovation that enhances patient safety, prevents complications, enhances coordination of care, delivers high-quality services, simplifies models of care, and sets a new standard for excellent medical care across all specialties for men, women, and children with rare diseases.

Kelvin J Holloway (Medical Assistance Plans Section in the Department of Community Health) He is the Executive Vice President and Senior Medical Director of the Medical Assistant Plans Division of the Georgia Department of Community Health. He is also an assistant professor in the Department of Pediatrics at Morehouse School of Medicine. Holloway is a native of Atlantan, completed his undergraduate work at Georgia Institute of Technology, earned his medical degree from Howard University School of Medicine, and earned his MBA from Kennesaw State University. He is a board-certified pediatric allergist. Holloway has served as a member of numerous boards, including the American Lung Association, the National Center for Health Housing, the Howard University Medical Alumni Association, and Children’s Shelter in Atlanta. He has received numerous awards and honors, and has been recognized as one of America’s leading physicians by Black Enterprise Magazine In 2003 and 2008, he appeared in Atlanta Business Chronicle World Health Organization Atlanta Healthcare. He also received the Floyd J. Malveaux Award from the National Medical Association, was inducted into the Alpha Omega Alpha Medical Honor Society, and received the Project Catalyst Service Award from the City of Atlanta.

Hong Li (genetics specialist) He oversees the Emory Metabolic Clinic, which provides care for nearly 900 patients with rare congenital metabolic conditions. Lee is the co-chair of the Georgia Newborn Screening Advisory Committee (NBSAC) and is extensively involved in the development, implementation, and clinical follow-up of new NBS in Georgia for children with metabolic disorders. As vice president of Child Care Genetics at Atlanta (CHOA), she and her colleagues provide genetic counseling to pediatric patients from across the state. Currently, she is the medical director of the Emory CRD (CTCF-related disorder) and a geneticist in the CHOA’s Multidisciplinary Sex Development Difference Clinic, where she provides expertise in molecular diagnostics to guide treatment. She is also a key member of the National Organization for Rare Disorders Data Collection and Analysis Working Group. I have multiple teaching roles, including associate program director of the Medical Genetic Biochemistry fellowship program, CME course director for weekly clinical conferences in Genetics, and bedside educator for medical students, residents, and genetic counseling students. Her research is primarily centered in clinical trials for rare diseases, and she is the principal investigator on several Phase I, II and III clinical trials.

Matthew Kroll (Department of the State Office of Family and Child Services) He is the deputy chief of staff and temporary general counsel for the Georgia Department of Human Services, where he helps oversee one of the state’s largest agencies. In addition, he is currently serving as a commissioner for the Brain and Spine Injuries Trust Fund. Kroll previously served as a health policy advisor at the Georgia Department of Community Health, where much of his work has focused on health care exemptions authorized by the Patients First Act. Prior to working in the state, Kroll was the Douglas County District Attorney for more than six years where he was recognized as the best attorney for mothers against drunk driving for his work reducing DUIs in Douglas County. He was previously a representative of the thirteenth district on the state board of education. Kroll is a graduate of Georgia State University and holds a BA in Political Science and a Juris Doctor from Western Michigan University’s Thomas M. Cooley School of Law. He and his wife, Catherine, have two daughters and live in Sandy Springs.

Kojo Mensa Wilmont (a representative from an academic research institution receiving rare disease research grant funding) He is Dean of the College of Science and Mathematics and Professor of Molecular and Cell Biology at Kennesaw State University (KSU). Before becoming dean at King Saud University, Mensa Wilmont was chair of the Department of Cell Biology and a professor at the University of Georgia (UGA). He was awarded the National Model Award by Minority Access INC and is a Fellow of the African Academy of Sciences. He has contributed to more than sixty peer-reviewed scientific journals and is the principal investigator for two ongoing federal research projects. At the University of Georgia, Mensa Wilmont continues to serve as assistant professor, advisor to the Minority Premedical Student Association and Scholars for Diversity in Science, Technology, Engineering, and Mathematics, and academic leader of the UGA Chemical Biology Group.

Tina Turner (Department of Public Health) She holds the position of Deputy Director of Child Health Services in the Division of Maternal and Child Health in the Georgia Department of Public Health. In this role, she is responsible for Children First Health Services unit programs; first care; Help me grow; Newborn and hearing screening, detection, and intervention. She has over 20 years of experience in the public health field, including but not limited to working as the Director of the Maternal and Child Health Program at the Ohio Department of Health. Turner has also implemented several quality improvement initiatives with hospitals, managed rural health initiatives, and implemented a team-impact approach.