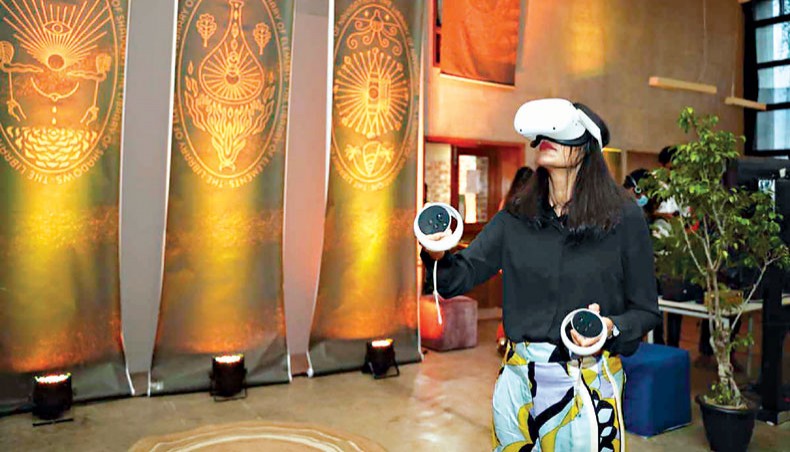 A visitor experiences a virtual reality installation called The Infinite Library at the Goethe-Institut Bangladesh at the DrikPath Bhobon headquarters in the capital. – press release

An immersive VR installation titled The Infinite Library, which reimagines future libraries as interactive spaces that engage visitors through multisensory forms of storytelling, kicked off at the Goethe-Institut Bangladesh at the DrikPath Bhobon headquarters in the capital’s Panthapath on Saturday.

The Goethe-Institut Bangladesh, in partnership with the Academy of Technology, jointly organized a virtual reality installation in Dhaka.

The Infinite Library is a traveling installation produced by the Goethe-Institut, Max Muller-Bhavan, New Delhi in India.

The Infinite Library, the brainchild of Prague multimedia artist Mika Johnson, welcomes the audience to a screen where they can get an idea of ​​the project.

The project includes a QR code game, holograms, 3D objects, and audiovisual works. The centerpiece of the project is a vast virtual reality library located in a cave.

Various replica artifacts were kept inside glass containers with QR code labels. Visitors can scan the codes and get an idea of ​​the things on their phone screens.

The main attraction of the event is a sandbox where visitors can experience an immersive virtual reality experience and learn about the various mysteries surrounding the origin of the universe and how humans evolved as a species.

In a virtual reality project set within a virtual cave-like environment, the audience can learn about different cultural backgrounds and more through time through an immersive and multi-sensory experience. The project expands the concept of the library into a platform where knowledge is transferred through virtual reality rooms.

In her welcome speech, Kirsten Hackenbroch, Director of the Goethe-Institut Bangladesh said, “The Infinite Library uses immersive virtual reality to explore the past, present and future of knowledge, expanding our ideas of ‘libraries’.” With its approach to inclusive education and a team of tech-savvy volunteers and innovators, the Academy of Technology prepares A great partner to bring this global travel venture to Bangladesh.

The ceremony was opened by Dina Hussein, an independent filmmaker and media and communications professional.

She said, “The Virtual Library Exhibition shows us the possibilities of new ways to explore knowledge and learn through experience and playing games. The Academy of Technology has done a great job by engaging young people who are passionate about technology. When children learn through problem solving and without fear of failure, innovations can happen.”

Micah Johnson, creative director of the project, said the Infinite Library is an example of how we can use new technologies, such as virtual reality, to share stories in ways that transport us to different places or times, through simulations that allow us to touch and interact with different knowledge systems.

He also added: “I chose the cave environment because we evolved as a species and left our thoughts on cave walls as paintings. Libraries have become diversified and there are libraries that store certain things such as tools or artwork. I wanted to play with the idea of ​​a library and I wanted to create a library that would store knowledge instead of books. This will help us understand what libraries might feel in the future.

Shams Jaber, founder and CEO of Bangladesh startup Tech Academy stated that virtual reality is one of the technologies with the highest expected growth potential, and this event aims to show what future libraries might look like for our youth with the advent of virtual reality. . I also hope that our young people will be producers of technology rather than just using technology.

The installation will remain open to visitors until September 14.